At 10:30 this morning, I decided to head to the Gardens and do some loooooong overdue clean-up on my tomatoes.

I opened the front door. Fully expecting the wash of moist heat to crash against my skin…nothing. I took a few steps off the front porch toward the garage. I stopped.

I went back inside.

Me: Hey! It’s almost chilly out!

Me: It is! I almost need a jacket. And my phone says it’s only…

In a race to beat the cloud cover’s inevitable break (which would let the heat come pouring in) I threw together the rest of my accoutrements, called the dog, and headed to the Gardens.

I was met with a lot of pruning. Little leaflets that mostly drop in your hand with a light grasp… 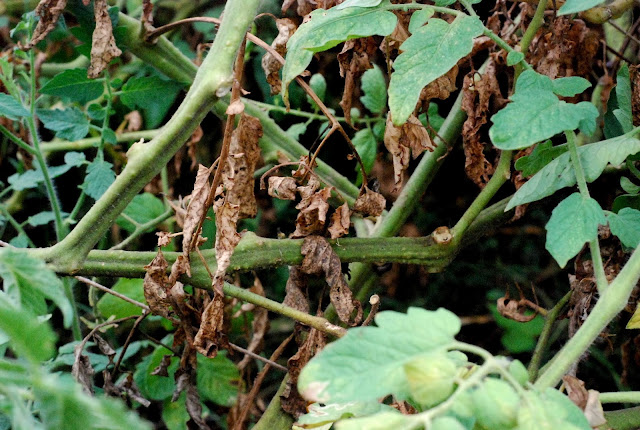 To entire plants that are ready to come out… 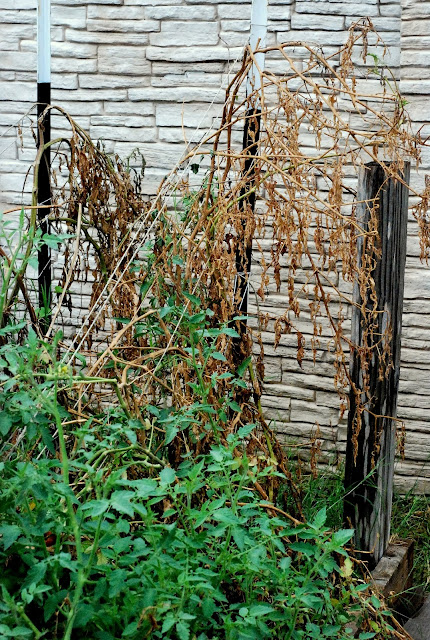 You can even see that it’s cloudy.

Two hours passed quickly, and while I nearly filled a garbage bin, the visual proof of progress was less impressive. 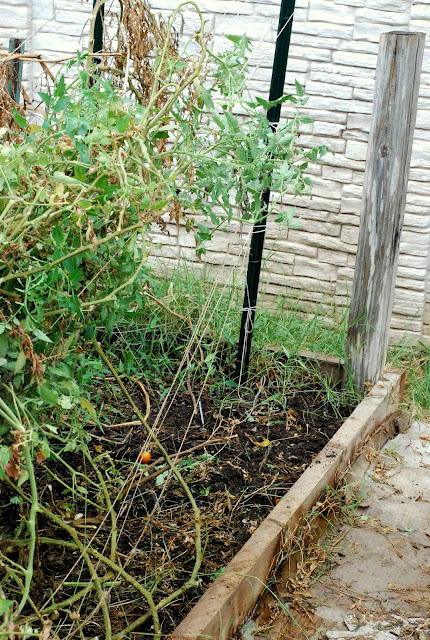 I did make a few discoveries during my work.

I learned last year that fall fruit only comes from new growth. Once fruit has set and dropped, that vein won’t fruit again. As with most pruning, tomato pruning encourages the plant to redirect energy to the new growth. So as slow as this process is, it works for me. I’ve seen others who demolish all of their tomatoes except for about 12″ of the trunk, mound up the mulch, and wait until fall. I’ve seen yet others cut an 18″ length of new growth from the top of a plant, bury it 12″ under, water, mulch, and wait until fall. I’ve never attempted either of those methods, but last year pruning all of the spent vines off the living branches resulted in more tomatoes than a salad could hold for weeks before the first frost took them all.

What won’t you get?

Well, I won’t get any of these: 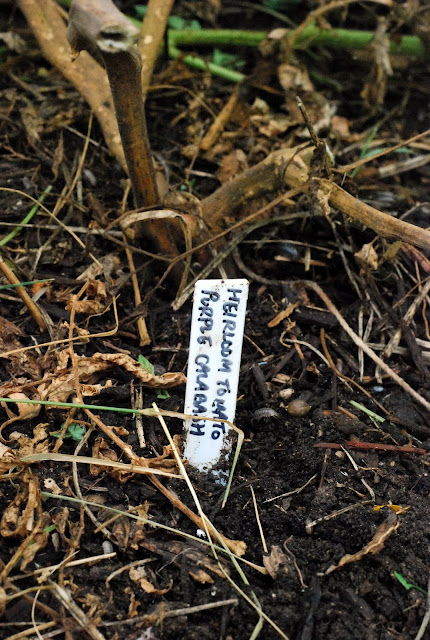 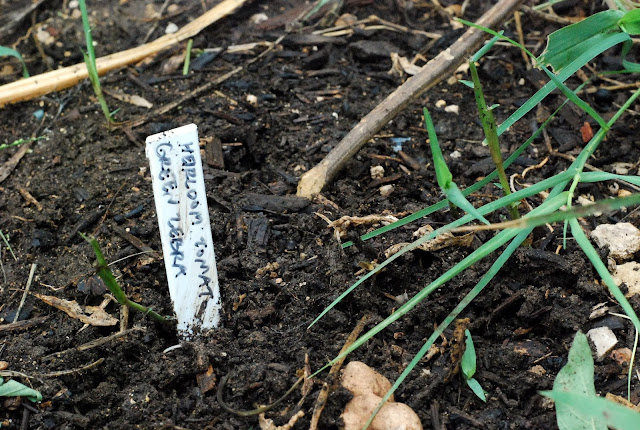 As much as the Purple Calabash grew into a vigorous plant, and as much as the Green Zebra hardly grew at all, neither gave up a single fruit this year. (They were also the only two tomatoes in the plot that I didn’t sow myself.)

Next year, I may really make the time to stake and prune the tomatoes like I’d like to. (I always make this vow. I’ve yet to keep it!) But why? Why worry about staking and pruning when this year’s harvest was epic, and the pruning can happen now?

It has to do with air.

The jungle that grew this year didn’t let air circulate. This is part of why there were bunches upon bunches of brown “twigs” throughout the tomatoes. When the air doesn’t circulate, the soil doesn’t dry out. This can be a good thing, in that the soil stays cooler even when the mercury passes 105. Like with most things, a balance is important. This year, my soil was a little more damp than ideal. How do I know? 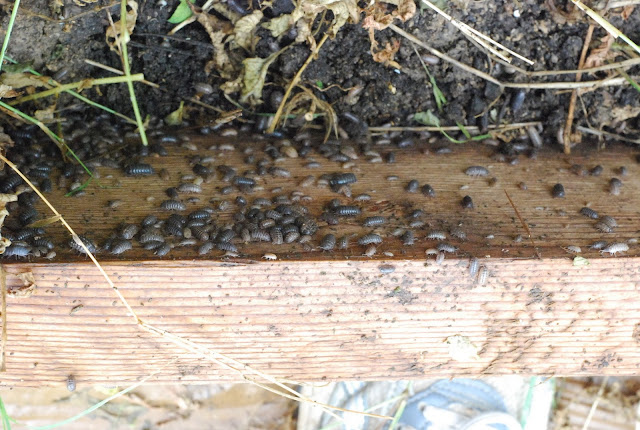 These guys. They like the moist. They like the dark. They like the rotting. They’re not “bad bugs” when they’re just here and there. When they reach these levels? They can take out a small transplant in a night. With the area cleared up a bit, pruned a lot, and re-trellised a smidge, they’ll be moving along to some place less airy and full of light (and more damp and dark) …like the rest of my tomato patch is still.

Guess who else I found hiding under the lush vegetation? 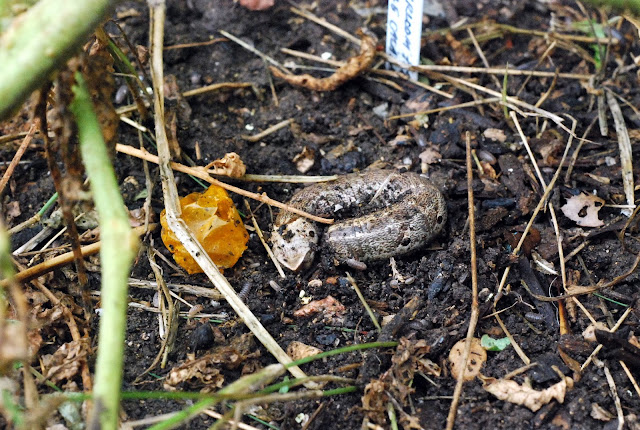 I don’t squick easily. I like most bugs. This thing…well, I thought it was dead. It didn’t mind the potato bugs crawling on it. It didn’t mind the spiders scampering across it. I couldn’t quite tell what it was, and decided to poke it with a “stick” (really, a length of tomato trunk.)

Lordy did that thing move! I managed to catch it. There was one other gardener working a plot this morning, and I walked over to her side of the allotments. She jumped back when she peered into the tub.

And that’s when I saw the horn.

This one made the one on the pecan look like a miniature caterpillar. I couldn’t squish it, it was too big and that would be actually disgusting to me. I found myself wondering if I knew anyone with a large pet bird or reptile. Instead, I left it in the tub on the porch until it was time to go snail hunting. 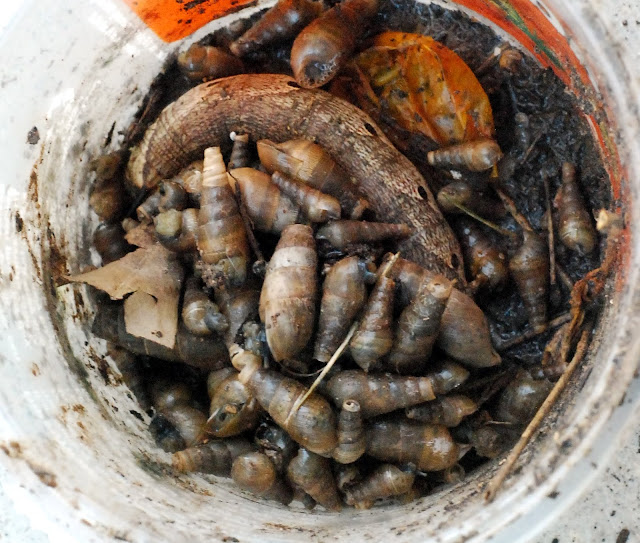 And the tub came along on our evening walk, which tonight had a detour to the pond. 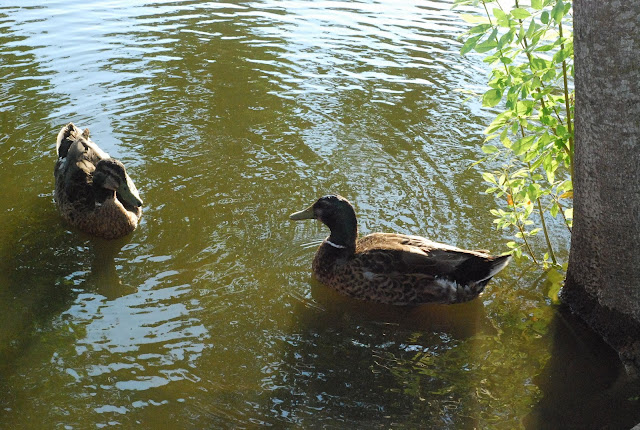 I didn’t stay to see whether or not the ducks (or the geese they ended up chasing around a tree, amusingly) found the snails and the caterpillar, or whether they’ll all just make their way into the bacterial stomachs on the pond floor.

Some people find their practice in yoga, or running, or painting, or baking. Something where the purpose isn’t achievement. The purpose is practice. Mine, for now, comes from the soil.