Pizza toppings from the backyard.

It’s a jungle out there.

The paths, left untread, are paths no longer.

But the basil basks in the shaded earth, cool toes wriggling in the damp.

And those who seek the warmth rise above.

I like surprises. I’ve claimed to like surprises for years. I still make that claim. I don’t often feel the need to specify that I like pleasant surprises. I jump in movies when things jump out at you. Enough so that those around me usually get a good chuckle (as do I when I’m settled back in my seat.) I never mean that I like those surprises…

What kind then? Well, the surprise carnations after a long week or the mid-afternoon coffee delivery during an eight hour meeting. Those kind I definitely like. I also like certain garden-variety surprises (pun! ha!)

A generational photo. The ornamental (so I’m told) Fiery Chili overwintered last winter, a little worse for the wear on the left. Rewarding my philosophy of “I don’t recognize that as weed or purposeful plant, I’ll let it grow” the chilies that dropped off in the freezes have made new offspring for the season.

I attempted to grow Butterfly Weed season after season, year after year, and on the actual final seeds in the packet, I finally managed to grow butterfly weed (last year.) It went to seed last fall. I gathered up the giant wishers (butterfly weed seeds resemble dandelion seeds, if dandelion seeds took steroids.) I tossed them to the breeze. This year the original plant returned to bloom again, along with four new specimens nearby.

The bramble or berry? I pruned it down to two main shoots as suggested. Within the week it had short nubby sprouts in the leaf stem armpits. One of which thought to test the air for pollen.

DH is a fan of basil with hints (or brazen) flavors of anise. Thai basil tops the list for him. Last year we purchased a small African Blue Basil with an anise nose from our local Green and Growing. It fell off in the frost and I pruned it to the ground. My thought being that the root system would feed the soil and bring joy to the microbes and fungal map. I did not expect it to return…the bees are ever grateful that it did.

And in remembering last year’s bumper crop of surprise acorn squash, I did not expect any acorns again this year as we hadn’t eaten any (to create a seed supply in the compost) since the last crop. I’d thought this little volunteer was a summer squash variety…

Volunteer Avocado the 9th. I though to dig him up and pot him last fall, to bring inside with his brethren. I thought further. I already had six his size in pots, not to mention Elian and the middle-sized one. I left him to fend for himself. Fend he did. We had multiple nights last winter hit 24 degrees Fahrenheit and while suffering a little leaf burn, he came back. He’s been frozen, eaten, and burned, and here he stands. Not the most handsome of arborly fellows, but certainly one of the more stubborn.

This little Lemon Basil (success at growing basil from seed! finally!) has enjoyed the shade of the carrot greens while adapting to the ways of the outside world. 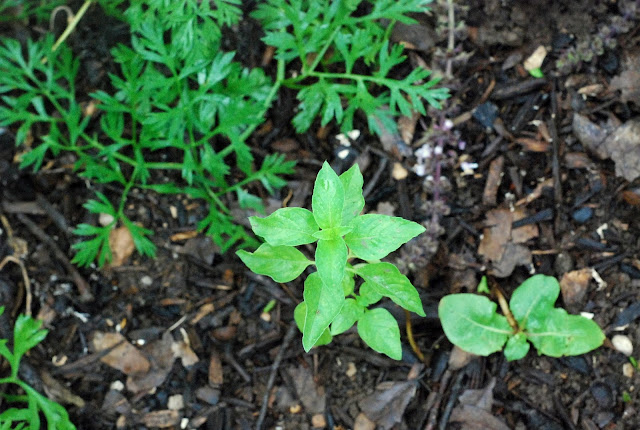 These two characters made me laugh when I saw them. It takes some special kind of talent to hang from the very thing you’re eating. 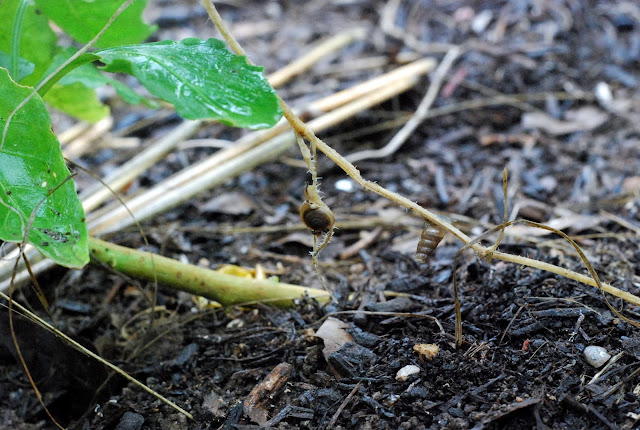 I used to pull the snails when I found them, dropping them in soapy water or taking them down to the pond. Then upon closer observation I noticed they left all of my food alone, and spent their time devouring the spent vines, the decomposing leaves, and the other not-quite-yet-composted goodies on the surface. Since then, I’ve left them to their own devices in the garden. Hopefully they’re not the ones responsible for the Squash Disappearing Act?