We’re looking at dates now. Perhaps we leave in a month. Perhaps longer. In all the planning there is, planning which plants to try and bring, which to give away, and who, if anyone, is eager to garden-sit… is quite overwhelming.

The three blackberries will go to a friend. The potted plum to my in-laws. Perhaps they’d like the blueberries, too.

Do you think this giant chard would mind two weeks in damp newspapers if I gave it a severe haircut first?

I’m tempted to harvest tomatoes green and wrap them in paper. A book I’ve just received discusses the method as a winter storage option. Surely it’s possible for any green tomatoes you might need to pick early.

The onions started falling over, so I’m starting their curing in batches. Trying this, learning that, one group of toppled tops at a time.

And then there are the carrots to pickle and the cucumbers to… pickle. Perhaps some dry beans will dry in time.

But I believe these are the last of my seeds I’ll sow for awhile. And I’ll never eat the sweet potatoes, okra, or melon on their way. I hope the popcorn finish as we’re ready to pack them in, and that the sweet corn make a delicious farewell feast appearance.

I’ll not count the gardens I’ve started and said goodbye to. I’ll remember this one as the best yet and the breeding ground for making home-farm dreams seem achievable. And I’ll miss it dearly, idyllically, forgetting the summer’s blasting heat coming and the bare earth during planting’s “winter” in the dead of July and August.

“Do you want to get away to the garden for a bit?“

It’s a kind question. An offer. The answer is yes (always, always, always yes.) I extract myself from limbs, ceding my space as headrest, blanket, octopus, to him.

I take the dog, who is missing his ‘brother,’ and am ‘caught’ by the dog catcher for not having him on leash before he attempts to elevate his lead butt into the back of the car. I assure her I have the leash and am simply getting him in the car. She is nonplussed. I don’t actually care.

There’s one other gardener when we arrive. Parked where I park. I park by a different gate.

I hear a drill. A hammer. I gather my remembered things, check my mask, and I see him. His plots are across from one of mine, between my two. He’s constructing a gate.

When it’s time to switch plots and we plod by, I comment on the rabbits. “It’s just survival” he says. I nod, agreeing that everything has a stomach. He chortles.

And we’re done. Back to our attempted solitude, shared.

It begins to rain. I haven’t remembered the right tool to cut the Brussels’ trunks. I go about removing sad leaves and harvesting what’s left. The rain increases. Tucked in a ball, low and small, the Brussels sprouts’ canopy shelters me mostly from the angled drops. I continue.

A whine. A soft, slow not-whimper. I look over. My dog is melting. Trying not to, attempted stoicism, but failure.

I pack up, trek my refuse to the compost bin, and load my grateful pooch into the back, with a leash, but with a running start.

I’ve missed time outside. Missed may be too gentle of a word. Craved? Yearned? Viscerally required..

With the more potent creatures of energy in this house discovering, pounding upon, and vocally barraging any boundary set before them… bedtime has fallen.

And with it, any hope at a regular visit to the garden in the evenings. Even with the garden a mere fifteen feet from the back door, it may seem miles these days.

Such that a large Black Prince splits one day and mildews in its splits the next.

I have my seeds for the next solstice now at least.

The okra is coming in slowly. Curious. Not enough at once for even a side dish. Perhaps the ten or so plants will gain momentum and I’ll rue this day soon enough.

A melon has appeared in the green beans. Did I plant that? This year? Or was it last?

The zinnias are, finally, holding true to promises of summer blooms. I hope the fun pops of pink and orange will continue as the heat climbs higher. The nasturtiums are hanging on, the troopers.

The corn lost the battle with gravity after the second flattening. The storm two weeks back took out the corn, half the tomatoes, and both windshields on my car (via tree.)

I should really remove it but have to move the beautifully composted compost out of the cooked pile first and… time in the garden is left wanting.

So happy solstice, y’all. From one still sunlit corner of the world, brightened ever more my a smaller sun mimic, to yours. May the ride down the backside of this year’s coaster be joyful, healthful, and grateful.

Their first night in the ground always leaves me apprehensive. Lone beacons of fresh greens in an open plain. The earth is awakening and there are empty bellies roaming.

Their pot homes become cloches. Their new beds make up an anchor for their hats. Sleep well, little starts.

I’d thought we were done with spring. Weeks hitting 80 and nights no longer cooling. Broccoli bolting and tomatoes past ready.

This week cooled again. Highs in the 60s, lows in the 40s, and everyone out soaking in the final days before the heat truly takes hold.

Each evening I’d lay on a blanket ten feet from the back door while DH or his amazing mother made dinner. Our daughter would ask me to find bugs, so we’d peer through the grass for ants and pill bugs (or rollie pollies, or as she calls them “doodle buhgs.”)

Today marks the last day of bed rest. She and I are outside examining pebbles and spilling water bottles. DH is planting tomatoes (24 transplants this year, and 14 of them kept their labels!)

“The volunteer dill is doing its job,” he announces. He comes over to help me up and the nearly-four of us trek to the dill. Sure enough. 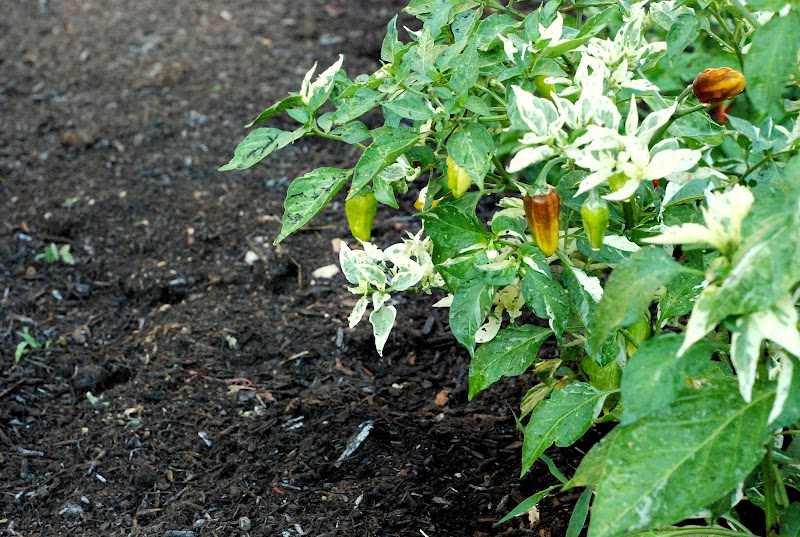 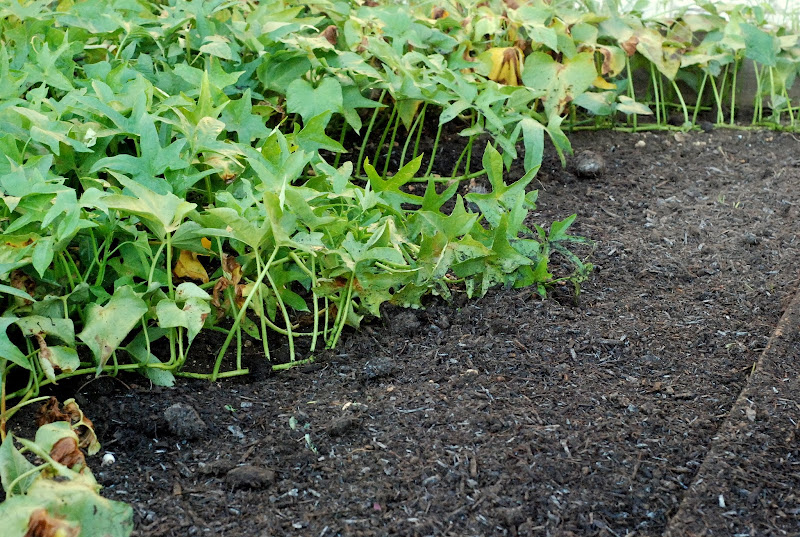 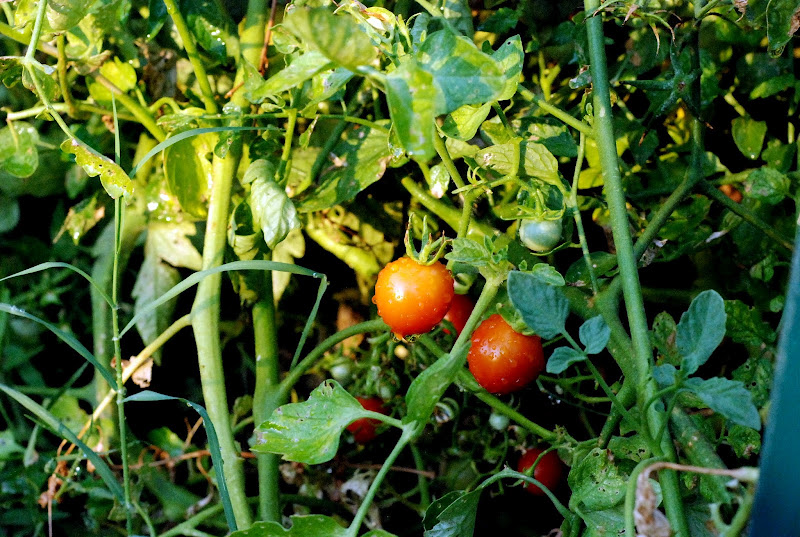 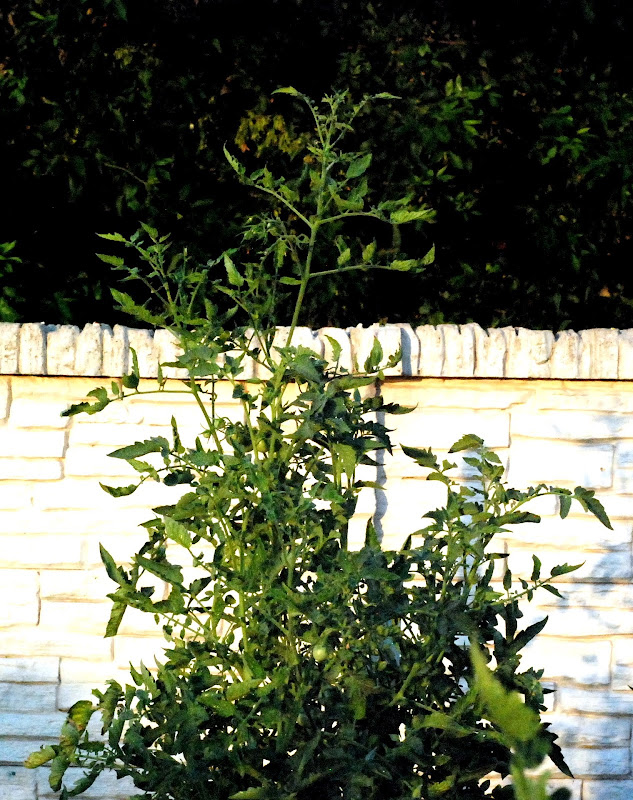 I thought I got a huge harvest on June 8th. Look at all those bigger guys out of focus in the background! 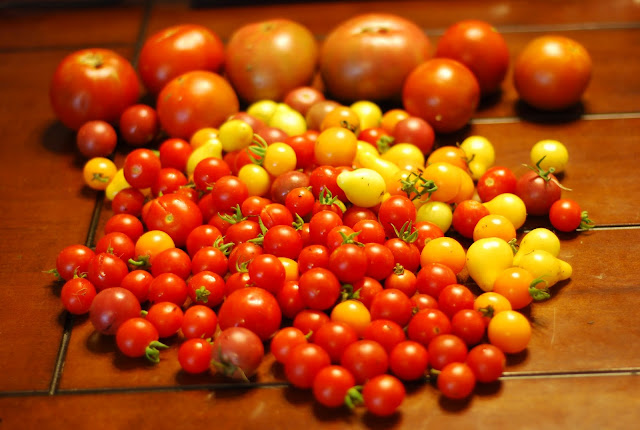 And then, on June 14th, I put the 8th to shame. Nearly twice the harvest as before! 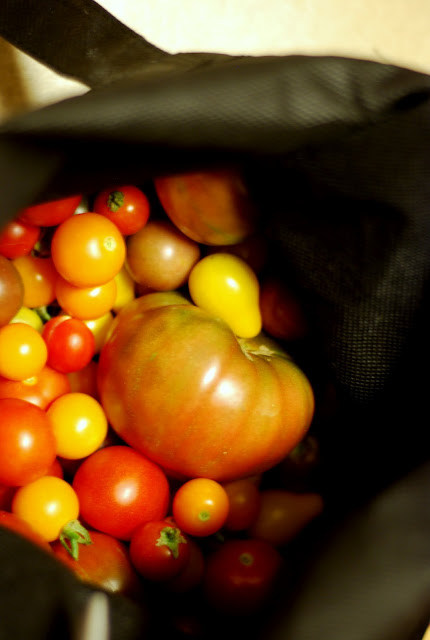 Sunday, for Father’s Day Birthday, DH’s family came over for dinner and afterward wanted to head to the garden. It was really neat walking around the gardens with them. Oooh and Aaaahing over the giant gourd squash, the comically huge sunflowers, the beautiful squash flowers, and the mystery corn-grass in others’ plots. It was also fun to hear them get excited over all of the ripe tomatoes in my plot like I do. Once again, the harvest left the previous harvest in the dust. Once again, the latest harvest was double the previous.

Want to see what (at least) 10 pounds looks like? 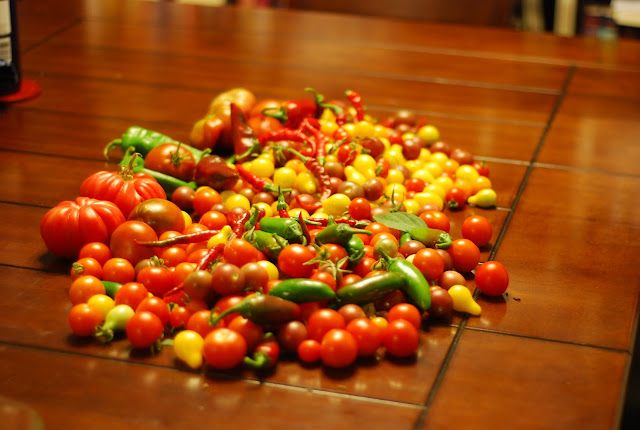 Why only “at least”? Well, the scale broke. I thought it took regular batteries, and knew it had been dying slowly. It finally died, and I go to replace the batteries…giant watch-style batteries. Crap. So we’re guessing on the weight this time.

That morning I snapped a shot or two  of two of the large varieties in the early light. The Black Prince (so named for the dusting of darker green/purple shoulders) and the Zapotec (the pink wrinkly one.) 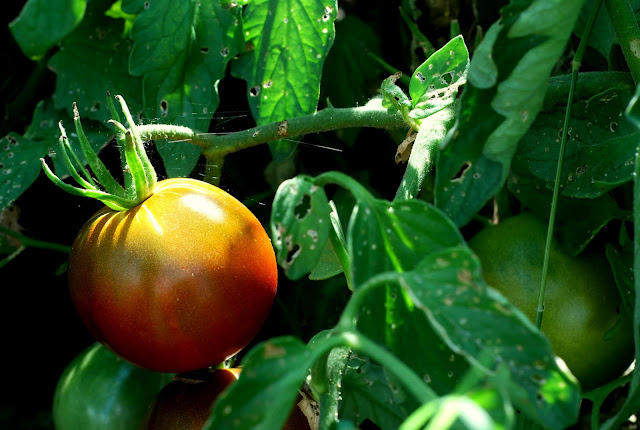 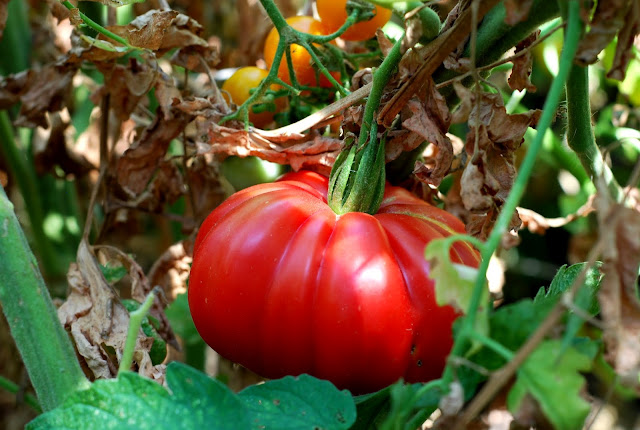