I didn’t use to plant flowers or other landscape plants. Last spring was my first venture into things that weren’t edible. I justified this change in two ways.

1) I had a lot more space than I ever had before. It is a smaller lot, so far as city lots go, and no where near having “land” in the sense I grew up with, but it was enough space to justify non-edible space-takers.

2) I was only going to grow things that were edible to other creatures – mostly bees. As much as I like birds, attracting birds to the same plot of earth that I use to grow food for us is asking for trouble. I already have to fight them for tomatoes as it is. As for the butterflies, I figure if the bees like the flowers, the butterflies may as well.

Aside from how cheerful Blanket Flowers are on their own, they make me even happier for their year-round supply of pollen for the bees that haven’t gone into hibernation. 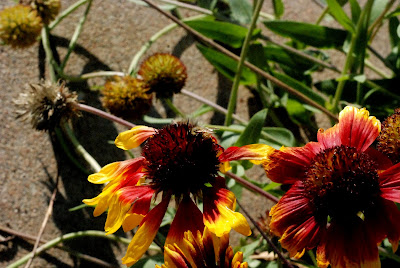 And while we’re covering pleasant surprises, here are two more. 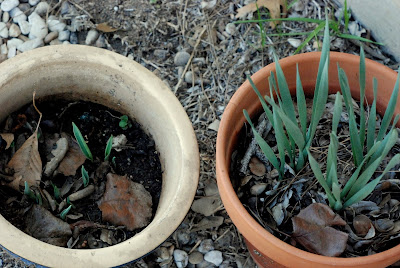 I had completely forgotten these pots had bulbs in them. I haven’t watered, fed, or otherwise cared for either of these in over a year. Nevertheless a few weeks ago, the tulips started to poke their heads above ground. Shortly thereafter, the ranunculuses popped through the soil. I’ll toss them a bone (in the form of bone meal) and some compost, keep their water up, and see if they won’t bloom this year.