I got off to a delayed start today. The animals conspired to awaken us earlier than we’d appreciated. We cooked our breakfasts side by side, and it was nearly time for some forced errands (work) followed by some elective ones (Pho Hoang and Home Depot.) By the time we’d returned and walked the dog, it was past two o’clock.

As much as the weather begged for an attempted hammock hanging and a good book, I’d told myself last night I would finish the front anchor plants today. So I donned my leather gloves, snatched up my shovel, and attempted to make quick yet thorough work of it. 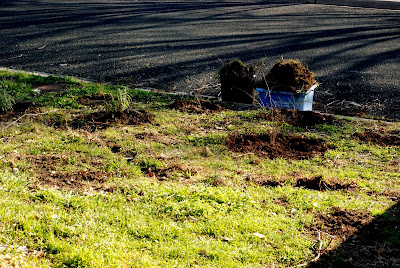 I’m not positive the mulch gathering folk in our neighborhood will want sod, clover, and other assorted greenery mixed with earth, but perhaps they do?

In the fading light, I thought to check in on my front flower bed. A year ago, there was a grass patch between our walkway and the garage wall. In a January drizzle, my mother and I ripped up a patch of sod from its roots and planted some nasturtiums. They bloomed awhile later and were joined by some borage, bachelor’s buttons, blanketflower, and others. The bed has had a few zealous varieties reseed many times already, others reseeded once and those seeds have been dormant, until now. 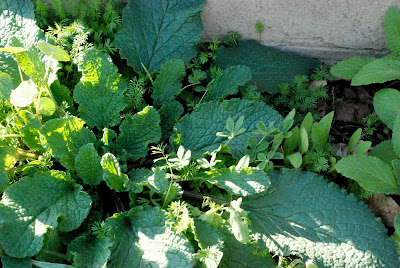 The monster in the middle is a re-seeded Borage. It will be awhile yet, but someday it will send up a stalk that will put out little bluish purple star-shaped blossoms. Borage has been used medicinally for a good long while, and the flowers can be added to salads or eaten straight from the stalk. I think they kind of taste like cucumbers.

There’s a nasturtium glowing in the sun’s rays, and a whole lot of other bits of life vying for space. I say bits of life, because I don’t always (or even often, as the case may be) know what it is that has sprouted in my garden. As a fortune cookie once told me (and now the slip of paper magneted to my fridge reminds me) “Much more grows in a garden than that which is planted there.” So how to tell friend from foe? Beneficial from invasive?

Once again, for me, was a good bit of Trial and Error, this time combined with some observation and some online image searching. For instance, in the image above, I can see a weed. You may be able to spot many weeds, since there are also at least two plants I don’t recognize. The one I see? I still don’t know the name of. If you look at where the concrete makes a line with the Borage leaf, and let your eye travel straight down, there’s a little thing that doesn’t belong there.

That little thing will grow into this: 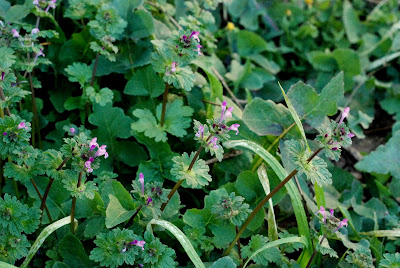 Anyone know what it’s called?

I actually find these “weeds” kind of pretty. Delicate purple and white blossoms on long stems with tiered leaves…but it must go. If it stays, my flower bed will look more like this: 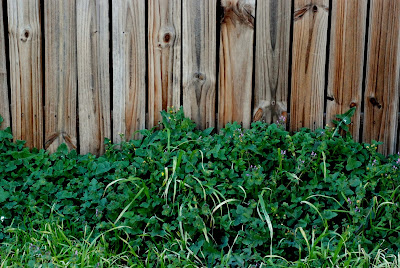 And that’s not what I’m shooting for. It would make a lovely ground cover for more wild landscape. Someplace where a meadow could turn dark green with purple flecks for the bees to feast upon. Until I have such a meadow, it must come up at the roots and go into the garbage bin.

4 comments on “Purple Weeds of the Unknown Kind.”