I braved the heat today. Even now, at 9:15 with the sun completely gone and the night black – it’s 92 degrees. But I added taller trellis lines to the tomato posts. I watered. I found another melon baby. (That makes three!) And I witnessed my first sunflower’s first bloom.

That 92 degrees has been busy though. Busy baking my harvested bean plants to the ground, busy stressing out my melon vines (sorry, guys! I’ll water you more often I promise…), busy making even the sweet potatoes wilt.

You know who wasn’t wilting in this heat? The tomatoes.

Do you know what they were doing? 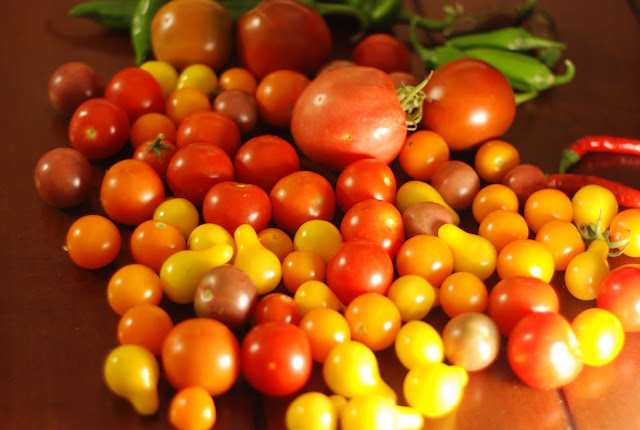 The first tomato harvest of the year wasn’t just one or three lonely little Chadwick Cherries like it usually is. I suppose it would have been had I ventured out to check on it days ago.

It’s hard to photograph tomatoes properly, I find. The oranges in the photo aren’t nearly the day-glow orange the tomatoes are in real life. The pinks look less pink and the purples look more purple.

Surely the internet has lessons in how to properly capture such colorful globes of flavor? Time to investigate!

In the background, we have more Anaheim peppers, more Jalapeno peppers, and the first ever (for us) Cayenne peppers! I don’t have the names of the yellow pear shaped ones, the day-glow orange, the small purple, or the small red – those were saved seeds from a colorful pint at the Farmer’s Market last year. Oddly, in the pint last year, they were all much smaller. The larger red cherries are the Chadwicks. The pinkish one taking center stage is an Oxheart or a Zapotec, I’d have to reference either my planting chart or last year’s harvest photos. The bigger guys in the background? Those are the Black Princes.

Sadly, the monster heirloom from saved seed from a Newport, Oregon Farmer’s Market went missing. It didn’t lose half its flesh to birds. It wasn’t infested with crawlies. It wasn’t even on a snapped branch on the ground due to too much weight and too little support. I’m trying my hardest not to think someone walked away with it. Perhaps those in the community gardens with fences have the for a reason after all…