I almost forgot to water the seedlings. Again. There are spikes in the neediness of work. A flux in the hours I spend around people, in front of a screen, or rarely anymore – scribbling notes to myself on paper in a hand few can decipher. This past week has been one such spike. Three weeks prior, I downloaded an app to my phone that tracks usage. It was part of a social experiment called Bored and Brilliant. I’m not sure how much I contributed to their experiment, but I do know that simply downloading the app has made me more aware of time spent diddling on my phone instead of doing things I, you know, actually want to be doing.

Let’s just say that there’s a little monk that provides encouragement and feedback, and last week he had tears running down his face while he begged me to put my phone down. But such is work sometimes. (Othertimes he smiles, hugs himself, and let’s me know he appreciates my taking it easy.)

So among all the monk feedback and work madness, I nearly forgot to water the seedlings. Again. But they were still moist, and were ready for the light to inch up slightly higher, and had more friends in the neighboring plugs. The aspects of gardening I find most successful in the days since becoming a mother are those that succeed under a “set it and forget it” plan of action. I’ve begun building a compost pile (as opposed to feeding the spinning barrel composter DH gave me as a gift years back) and building it smack dab where I want a perennial bed. Why not? If I can get it to cook where I want to serve it (so to speak) I won’t have to find the time to shovel and haul and spread it.

I did manage to pull and burn more grass weekend before last, which was satisfying. Anytime the world feels off-kilter, I know that I either need sweat running over a pounding heart or dirt cramming under the nails of fingers building calloused skin. Or a nap. Occasionally all it takes is a nap to set the world right again.

So I continue to marvel in the child who grows like a loved upon weed and allow the new beds I wish to build, the grass I wish to pull, and the plants I wish to invite into my space…to wait.

She really is growing like the most beautiful creature I could imagine. And all of my gratitude for that erases any itch I can’t scratch in the time I do muster together to work on calluses or dirty up my nails. 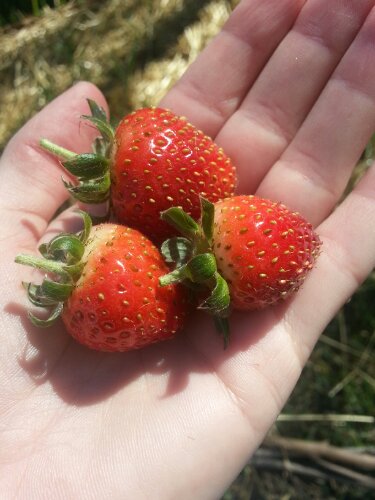