I started a strawberry bed last fall. There’s a six inch deep, eight inch wide, and twenty foot long concrete trough between the foundation of the house and the sidewalk in the backyard. With strawberry’s tendency to take over the bed they’re in, I figured the concrete cage would keep them in check. (I later learned they simply crawl over sidewalks, but that’s another story.)

I gave them straw mulch over the winter, some sand and compost in the spring, and they gave me strawberries from January through last month.

The compost also gave me some volunteers. A few tomatoes that gave up at 18″ tall, a pepper sprout or five that keeled over at 5″, and what is either purslane or a weed I don’t know yet.

Another volunteer it gave was what I assumed was a squash. It started with the dark green split leaf sprout of squashes. But then it started to hint that maybe it wasn’t a squash.

It wasn’t hurting the strawberries, so I waited to see what it would do next.

This six inch by eight inch trough was also where I planted a little $2 sage plant from the grocery store. “It’ll make a nice 1′ by 2′ sidewalk edge plant,” I thought. “It’ll smell nice,” I thought. “We can cook with it all the time,” I thought. (I was right on two of those thoughts. The thing has been pruned multiply times and is still about three feet tall, six feet wide, and three feet deep…) 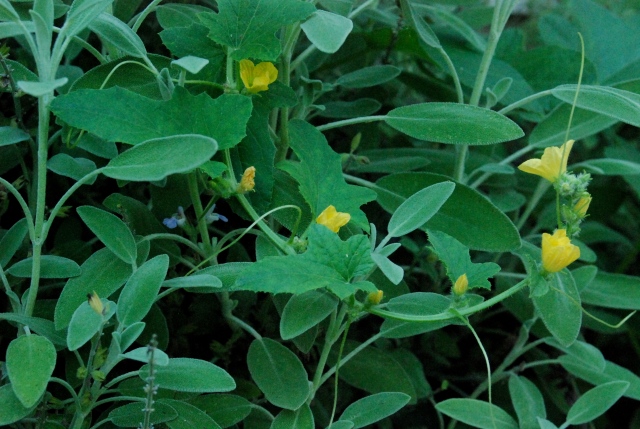 And then the rains came. Our spring was great for gardening, as I’d mentioned. And by great, I mean that we actually had a spring. That lasted for months instead of days. Even our summer was postponed and when in previous years we’d already had 24 days over 100 degrees Fahrenheit, we’d only had 6. The rains that came soaked the strawberries with purpose and a vengeance. The strawberries laid down in surrender.

In doing so, they revealed a treasure (and ruled out cucumbers…) 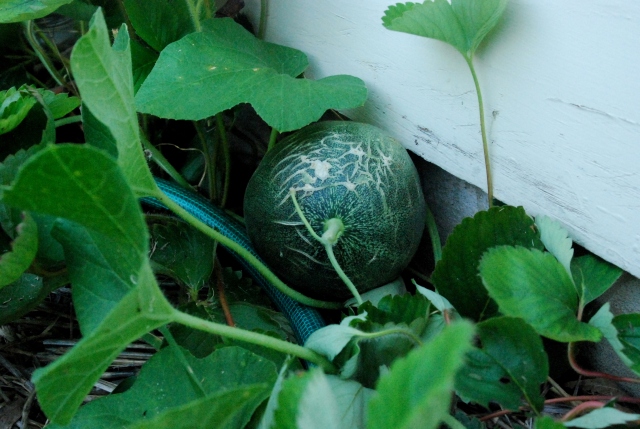 No one in this house eats watermelon or honeydew. I think it must be some variety of muskmelon/cantaloupe…that looks like a watermelon. Which variety of melon…is the final mystery of this detective novel.