As much as I am a fan of rules sometimes (logic is fun!) other times, I’m perfectly content to find my bliss outside the lines.

Some seeds are super easy to save. Lettuce is one of them. I often lose track of my lettuce. I’ll eat it, and eat it, and it’ll grow back again and again. Until at some point I either need a break from lettuce wraps and salads, or the elements conspire for lettuce growth, and before I know it, my lettuce has bolted a few feet in the air. At that point, I know (from experience) that it won’t taste that good. Pull it up? Make room for something else? Sometimes.

This year, having lucked out with acquiring 400 square feet of allotment in a community area, I’m experimenting with a long time goal of mine – a volunteer garden. Last fall, a few lettuce varieties volunteered in my lawn. I transplanted them into the garden after taking down the tomato forest. They reached about five feet tall before the flowers began to appear. About two minutes, a paper bag, and a pair of clippers results in more romaine seeds than I will possibly need. 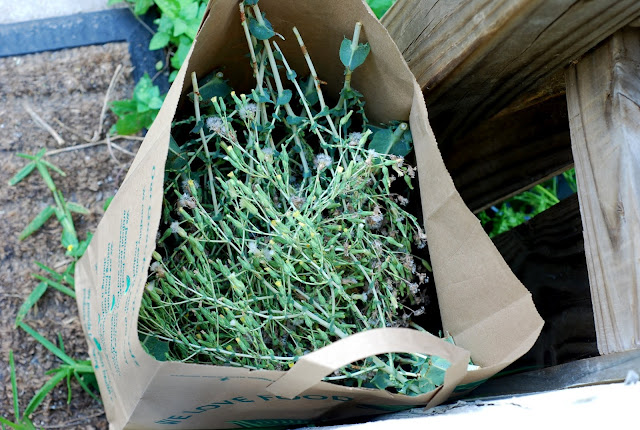 Wild flower seeds are also super easy to save! 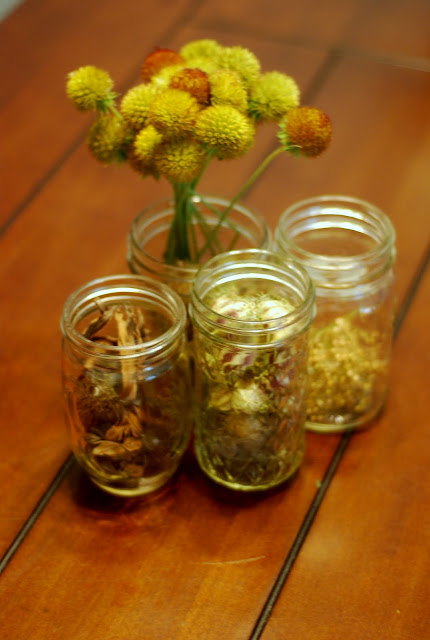 The “bouquet” in the back is made of the seed heads left behind by spent Blanketflowers. The jar on the left has Cone Flower Heads drying slowly. The center jar has the interesting pods left behind by Love in A Mist. On the right? Cilantro seeds, aka coriander.

Sometimes, “seed saving” is more of a harvest for our bellies than it is for the purpose of growing more plants. For instance – beans! 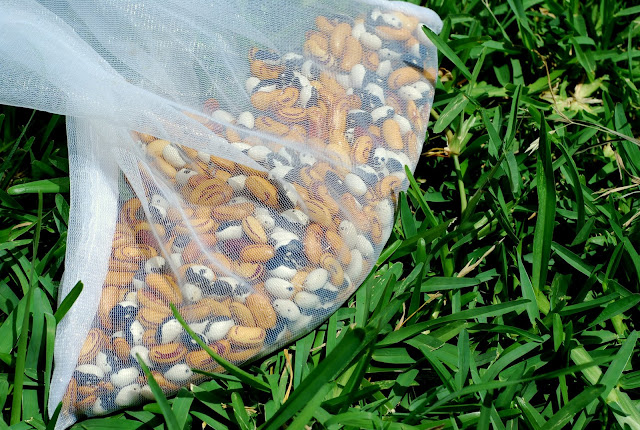 This is the main harvest of soup beans for the spring beds. Half Tiger Beans, and half Yin Yang Beans. It’s so nice to sit inside on a hot afternoon, grabbing some lunch and shelling beans. The dried bean casings make for good “brown stuff” for the compost, too!

I do save beans for the next season’s plantings as well, and I don’t save any old beans either – I start to play with the genes in the most simple way possible.

If a single plant has a lot more beans than the others, I’ll save a pod or two off that plant to hopefully encourage per plant production. If a single pod has five beans inside instead of four or fewer, I’ll save those beans as well to try and encourage more beans per pod. Occasionally I’ll remember to also save some of the first beans of the year (encouraging early production) and some of the last beans of the year (encouraging heat survival.)

For instance, Yin Yang Beans most commonly have 3-4 beans per pod. This guy got to have his seeds saved for planting (instead of for eating.) 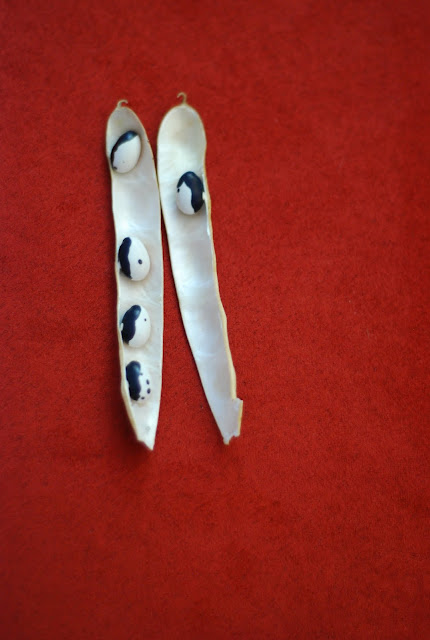 Not all seed saving attempts are successful. Most recently I tried to save seeds from a Farmer’s Market Patty Pan Squash. I scooped out the seeds, soaked them in water for a day or two, strained the goo from the seeds, and spread them on a paper towel to dry. When they had dried completely, it was clear that none of the seeds had had a chance to mature properly in the flesh, and wouldn’t be viable. I bought three more of the same patty pan squash this morning at the market to try my luck again. If I strike out a second time, I’ll simply break down and purchase the seeds I want. Then, when they’re growing in my garden, I’ll leave a squash on each plant to over-ripen so the seeds have a chance next year.

Other reasons not all seed saving ventures work out? Those “rules” the books and articles talk about. Beans are easy because they mostly self-pollinate. Other plants are friendlier with other varieties of the same type of plant. If you saved the seeds of cantaloupes planted next to cucumbers, you may not like what grows the next year! So the rules can be important, if you’re picky about the offspring being true to type, or if you want to make sure your snozzberries taste like snozzberries (which is important to do sometimes!)

2 comments on “Do you save seeds?”