There are a lot of ways to grow green beans. Bush beans are the compact varieties that purport to not need supports. Pole beans need a decently tall support system.

I’ve seen people use beautiful trellises. I’ve seen 1″x1″ sticks whipped into a teepee. I’ve seen wire cages and a myriad of other contraptions. When I first started growing beans in 2007, they were in a pot on a balcony. 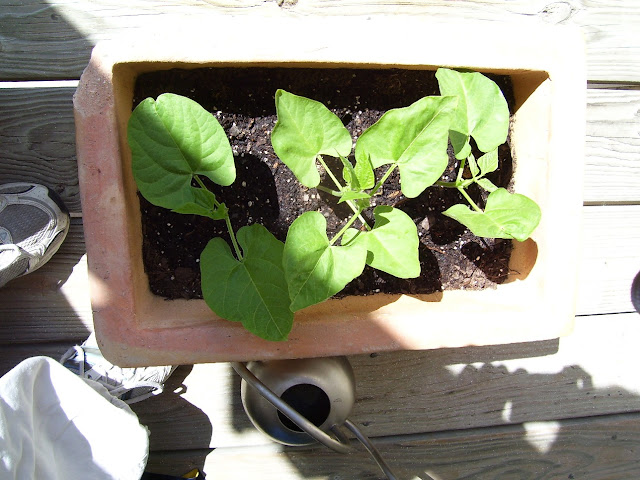 That pot wasn’t going to hold a trellis. I didn’t have the budget for a wire cage either. I thought about using the balcony railing itself, but with afternoon sun hitting this balcony straight on, I wanted it mobile in case my learning curve required movement. I looked around my small space, and found a bamboo stick. I had some string left from a tied quilt. A longtime fan of building forts with what’s on hand, I thought to build a climbing “fort” for my beans. 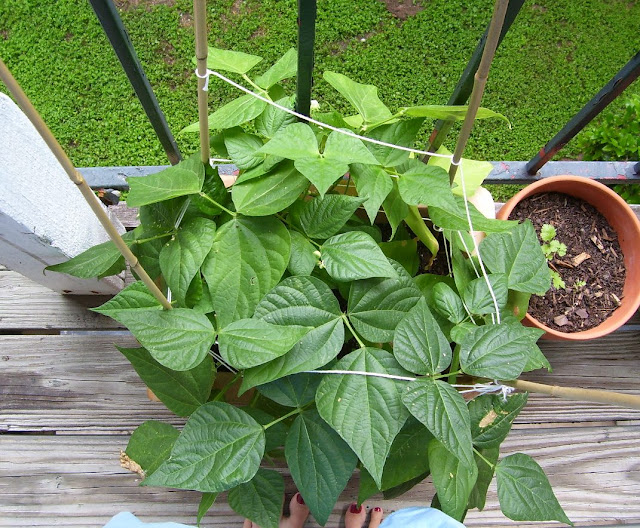 Things I learned from this project:

And so adjustments were made. For the last four years, and again this year, I’ve used the same simple system. I ditched the bamboo stakes all together. I kept using the same string, and from last year to this one – I’m actually using the exact same pieces of string. 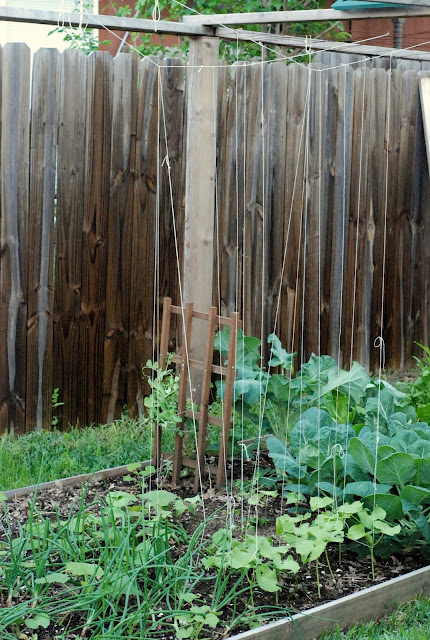 See? I did mow and edge! But really, last year DH helped edge this bed in planks, and also helped dig in six posts and screw in cross beams to create a top structure that mimicked the rectangular shape of the bed. From there, he screwed in anchor screws every 3″ for me where the beans would be, and strung wire across the width of the bed. From those wires, I tied off falls of string, which met with the beans on the earth.

At the end of the season, I carefully saved the strings so as to not let them knot, and here they are again! In my crop rotation, the beans are under sections that lack the cross-wires. Because I wanted to get this done in the snatch of evening light I had available, I didn’t ask DH to add more wires. Instead, I ran a cross-string from one wire to another, and tied my drop lines from it.

Now the beans are set. When each one buds its climbing vine, the string is ready. I learned (and finally remembered!) to string the beans before the climbing vine appears. Once it does, it will grab onto whatever it can…other beans, tomatoes, onions, weeds… and getting it to gracefully retreat to take to the string as you want can damage it, or whatever it’s attached to.

But what about bush beans? Don’t those stay compact and not need a structure?

Bush beans definitely won’t grow 10 feet tall, it’s not in them to do so. They will on occasion, depending on variety and environment, grow tall enough to fall over. When that happens, the beans you were hoping to nurse onto your plate, or into your saved-seeds, will be devoured by the hungry critters on the ground. Or mold. Or mildew. Or otherwise allow diseases to enter into the plant more easily, creating an issue.

So, I give them a hand. They don’t necessarily get strung on strings (unless I have extra strings) but they may get some good mulching, or string, or a random trellis I acquired. Anything to give them just that little boost to stay off the soil can help.

Last year, I gave the Tiger beans a little string, and left the Yin Yang and Soleil beans alone. The Yin Yang beans didn’t mind, but the Soleil were a little iffy. So this year, the Tiger will get their structure – perhaps a trellis akin to a vineyard? We’ll see. The Soleil, unfortunately, are being demolished by a mystery pest. 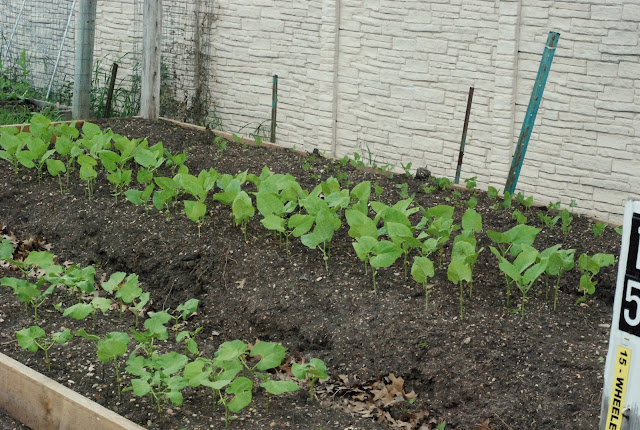 The near ones are the Yin Yang, the middle are the Tiger, and the back ones, that are small when they’re not eaten, are the Soleil.

Any ideas on the pests? All I’ve seen are rolly-pollies. The damage looks like caterpillars to me, but I haven’t seen a single one. 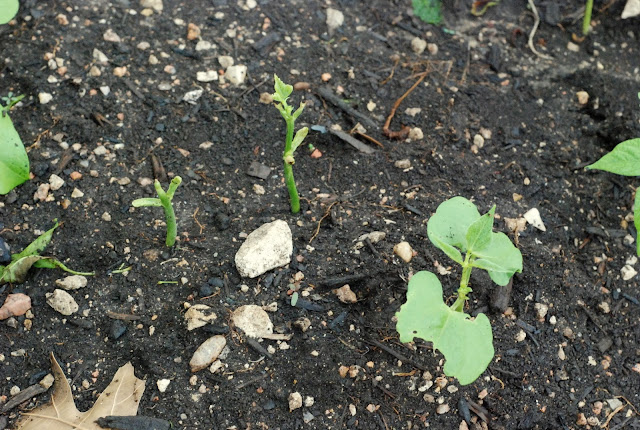