Seasonal changes where I grew up in the Pacific Northwest of the United States were gradual. Days slowly got drier and warmer as they got longer in the spring. In the fall, they slowly lost daylight hours to night hours as the temperatures mosied down the thermometer until winter. Texas is different. Central Texas is a fan of a 40 degree temperature drop in a matter of hours. A cold front comes in and that’s that. The humidity is pushed out, the sky clears, and the temperatures plummet.

Thursday, I took my tomato and pepper sprouts outside for the first time and worked in shorts and a tank top and was warm. Today, I was in jeans and a tanktop while shoveling a cubic yard with DH. Tonight, I’ll be bundled in pants, long sleeves, a jacket, hat, scarf, and gloves. Oh, how the winds change things. 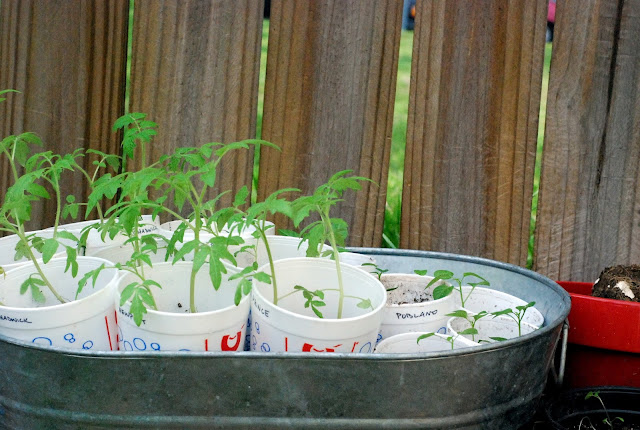 Each year so far I’ve forgotten how the peppers stay small for so much longer than the tomatoes do. These tomatoes were the usual little leggy sprouts in a tray, that got planted up to their necks about a month ago. Here they are, ready to be buried once again.

What else is the weather doing? It’s bringing things to life. This is June. (We name things in our household. Not all things, but more things than I think most households name.) June is a grafted plum tree. She houses four varieties on her delicate limbs. She came from Raintree Nursery late last spring.

June thinks it’s time to bud, and it very well may be. 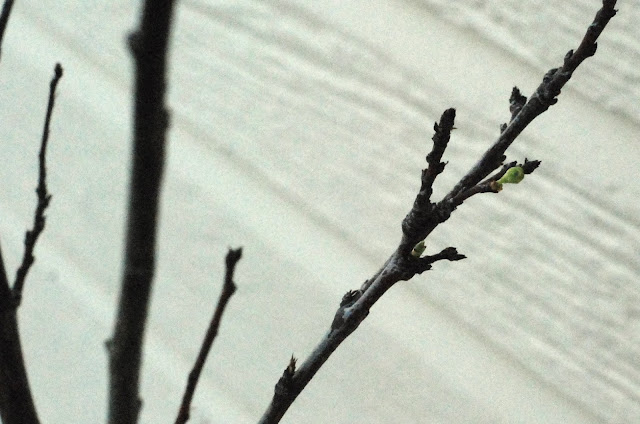 Speaking of things that it’s time for…

Each year for the last few years DH and I have gone camping for our anniversary. It gives us a chance to be out in the quiet wild of the world, spend time with each other away from the laundry (but not the dishes), away from the world of now-now-now, away from cell phones, laptops, work, and people, and just be. We had planned to go this weekend, and oddly both of us, as we were set to start packing the car, looked at one another.

I didn’t really want to go. He spoke up. “Do you really want to go? You don’t seem that excited.” I wasn’t. It turns out he wasn’t either. So instead we’re doing some homesteading/nesting for our anniversary weekend. Part of that is putting in some serious labor on the new garden plots.

Yesterday, DH spent a couple of hours turning the rest of the Left Bed to aerate the beaten down, lifeless soil. I followed behind on a beam of wood that distributed my weight evenly so as to not re-compress the soil, pulling out bucketful after bucketful of weeds. We even found a potato and a beet the previous gardener had left behind! For some reason, our dog, T, thought that potato was the most fun that could be had at that moment and spent the next twenty minutes tossing it into the air to himself, chasing it down, and tossing it again.

Today, DH drove us in his little truck to Whittlesey’s for a cubic yard of soil. We ended up getting their Austin Soil Amendment. 66% organic compost, sand, and other nutrients to help feed the earth and break apart our dense clay. The mix sparkles ever so slightly in the sunlight. We spent the afternoon with two shovels, a wheelbarrow, and a lot of back muscles. With a little final work with a hoe and a rake, the mix was spread evenly across the 200 square feet.

Tomorrow will be a trip to the lumber yard for enough 2″x6″ beams to make two foot-wide paths twenty feet long. When those are in place, I’ll turn the amendment into the soil, sow a couple hundred drying beans, water, and move on.

Move on? Well, yes. There’s a-whole-nother 200 square feet that needs to be weeded, turned, amended, and structured.  That bed needs to be finished next weekend so the tomato and pepper plants can settle into it before the heat really comes to stay for good.

2 comments on “The weather outside is weather…”