As such, I will not complain about rain. No matter the amount, the frequency, the clouds, or the cold. We need it. I’m grateful for it. I can almost hear the trees sigh in pleasure from it.

It did, however, put a damper on my Saturday plans. I had planned to spend most of the day on Saturday out in my new community garden plots. Turning the earth. Aerating. Amending with manure. Enjoying the air. Acquainting myself with the soil. Instead, I spent the morning at breakfast with DH and his mother before trekking to the Farmer’s Market  to pick up some more red carrots, beets, kale, and mushrooms, among other goodies.

Upon arriving home, I promptly fell asleep for an impromptu nap. Awoken just in time for some dinner before a movie date, and that was the day.

Sunday, however! Sunday broke to clear skies, warming air, and a soft and cheerful breeze. I downed my breakfast of market finds sauteed in bacon grease (complete with duck egg, a first for me!) and started loading.

I still had maybe a 1/3 of a cubic yard of farm manure left over, and began shoveling it into the wheelbarrow, wheeling it to the truck, up a ramp, and dumping it onto some weed cloth. When most of it was in the truck, I loaded up my tools, my water bottle, and my gloves, and took a short drive to the gardens. 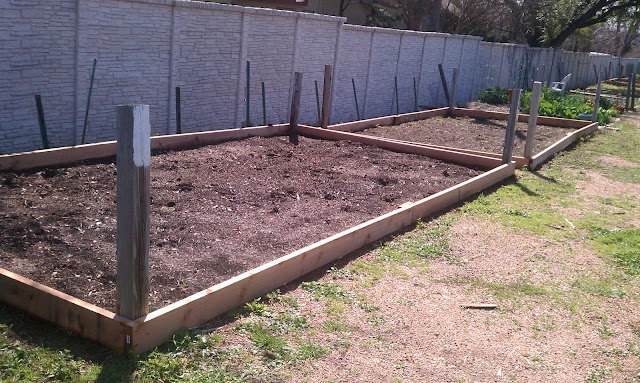 Those, dear readers, are my two new garden plots. 10’x20′ each. On days where I don’t need to haul manure, I can walk to these gardens from my home. They’ve allowed me to quintuple (quintuple!) my garden space for 2012! I can’t stop smiling when I think about what that means.

The one in the foreground had a gardener last year. According to the gardener of the neighboring plot (not pictured) my predecessor was a bit angry of a lady. The soil appears to have taken the brunt of her anger. It is compacted. It is lifeless (I found one little earthworm, a mere two inches long, in 30 sq ft of digging.) And while the bed may look mostly cleared out in the photo, do not be fooled. (I was fooled.) It is not a weed-free bed. It is a weed-full bed…covered in mulch.

The bed in the background, according to the same neighboring gardener, was weeds all last year. I was worried when I heard this. However, upon first touch, the soil is lovely. It’s loose, crumbly, and soft. That has never happened for me in a new-to-me garden bed in Texas.

With those as my starts, I started in on the harder undertaking. It was time to show the soil in the foreground some love. It was time to see if I couldn’t breathe some life back into it. And with that in mind, I got to work. 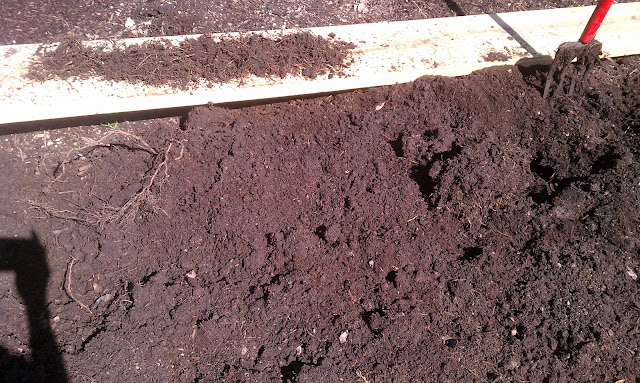 The more work I do now, the less I’ll have to do in the future. The future is a lot longer than the now.

And so, after three hours of re-shoveling manure into a wheelbarrow, down the ramp, and into the beds, followed by 30 sq ft of earth turning, root sifting, and deep root pulling, I was hungry and it was time to head home.

I’ll make it out again tomorrow evening (tonight is Mini Tri Training) and hopefully again Friday morning. This weekend we go camping for our anniversary, so Saturday will once again be full of other things (like campfires and swimming!) Sunday, however, should have a few more solid hours of root-pulling in store.

I think tomorrow evening, I’ll be planting beans in my home-plot. Three weeks early, yes, but with a high of 81 on Thursday and the lowest night temperatures only hitting 42 for the next ten days…I’m feeling like taking a risk.

3 comments on “Saturday, it rained.”