The sun is setting on the day. A sun shiny day with chilled crispy edges. The tree hadn’t leafed out in over a year. I’d never seen it leaf out completely. It was slowly shedding the bark from its truck near the earth. A large branch toward the street, and another toward the garage, were cracking along the length. Inch by inch, day by day.

The main truck was trying. It was sending out small little sprouts with single or double leaves. The branch near over the drive and along it were done for, we had to let them loose weeks ago. I did some recon for a replacement, at Green and Growing up the road, and with a final vote from my other half we picked up a Mexican White Oak (aka Monterray Oak.) We believed our previous tree to be a Silver Maple, and it was quite large for a younger neighborhood tree in Austin – possibly topping forty feet. We did water it this summer via the lawn during the 2011 Drought, but believe the damage had been done the previous year. This is a rental, after all, and not all tenants have the time, desire, or funds to water their landscapes.

We pulled on our ropes. Slip. Swing. Thunk…craaaack…CRASH. The branch near the house was down. The branch pointing to the streetlamp took longer, but came down into the road.

Sunday, new chain at the ready, it was time to bring down the tree. When firewood was made and loaded for family, the job was done. Any concern that I may have decided to remove a healthy tree was relieved when we had done so. The center of the trunk was hollowing out, the hole ascending up through the trunk. 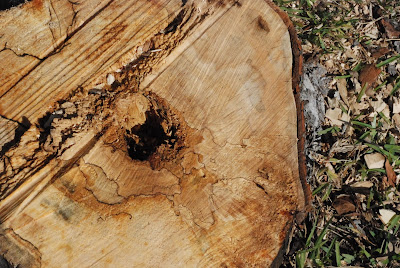 I had dug a hole on Saturday. Three times the width of the pot, and as deep as the 12″ pot. We broke apart the edges of the hole. Loosening the soil allows the roots to make their way wider, faster, and survive droughts earlier in their lives. I added some manure left over from the garden, we righted the trunk of the new tree in its hole, and set to work replacing the earth. With a dam built around the lower edge, the original bamboo stakes in place, and leaf mulch making a ring, we were set.

Our new tree was home! 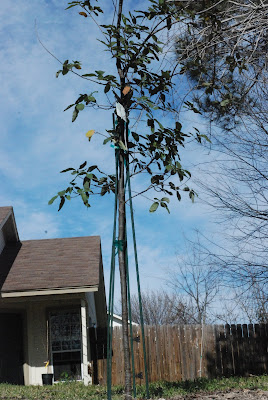 Notice the lack of bamboo stakes, and instead the tomato stakes?

We had a bit of a storm on Wednesday. Lightning like shotgun blasts and thunder for hours. Rain in the inches (plural!) and wind beyond wind. We awoke Thursday morning to find our new tree, still rooted, but laying nearly flat along the grass. The bamboo stakes had snapped at ground level!

We hurried to re-stake, re-tie, and otherwise prop up our poor beaten fellow and managed to not be late for work.

It could probably use with a wind-side anchor point to help it straighten a bit further, so perhaps a trip to the store is in order tomorrow. I was ever so grateful that we did take the tree down when we did, as I can’t say with any certainty it would have survived the storm intact, and may have caused damage to house, vehicle, or streetlamp.

Things I learned that day: